In a co-production by Brae Editions and GoMA, Glasgow, A Nudge for Joan Ure was presented in the Gallery’s Project Room on Saturday May 11.
The following review, by Carla Sassi, Associate Professor of English Literature at the University of Verona, was first published, in an edited version, as the ‘Long Letter’ in The Sunday National, May 26.

On August 19, 2018, the Edinburgh International Book Festival presented a rehearsed reading of Doctors of Philosophy, a play by Muriel Spark premiered in London in 1962 and then, notwithstanding its author’s global success in the subsequent decades, largely forgotten by critics, publishers and theatre directors. The success of the Festival’s reading was enough to confirm that this is a work as subtle and witty as any of Spark’s more famous novels. Why then, of all her works, has this one been consigned to oblivion? More generally, what makes a literary voice or an individual text “disappear” from the canon — the literary memory of a national community?

Similar questions were implicitly raised by the excellent event presented at the Gallery of Modern Art (GoMA), Glasgow, on 11th May this year, with the collaboration of Brae Editions of Orkney. The event was entitled “A Nudge for Joan Ure”, coordinated by Alistair Peebles, and presented by actresses Deirdre Murray, Alison Peebles, Barbara Rafferty and poet and academic Alan Riach. The programme comprised readings and discussion of a selection of poems and dramatic writing, including excerpts from two of Ure’s unpublished plays. Smaller in scale than the Spark Book Festival event, it was nonetheless equally effective in retrieving the complexity and wit of an extraordinary literary voice, and in revealing its vibrant contemporaneity — a voice of “disarming integrity” and “wicked ingenuousness” to borrow from Ian Brown’s commemorative poem, “At Antalya. Remembering Joan”. 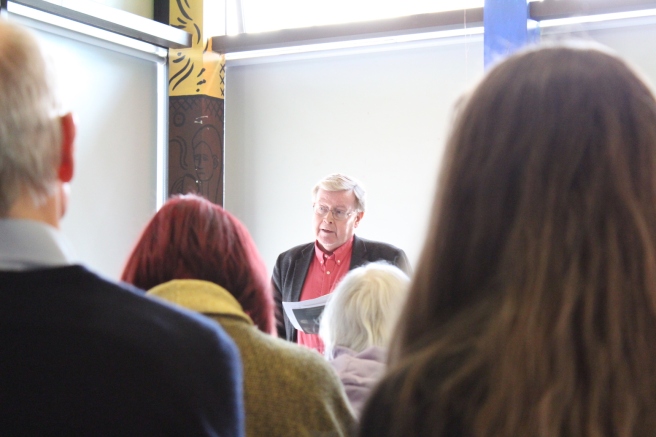 Alan Riach discusses the work of Joan Ure, and introduces readings by Alison Peebles from the selected poems published last year in The Tiny Talent.

Joan Ure’s was of course first and foremost a powerful (post)feminist voice, speaking directly to our times, through her choice of an ironic, often understated, and fluid stance — “The Tiny Talent”, the poem after which the 2018 edited collection is titled, being an eloquent example of this. Alan Riach, beside reading some of the poems and excerpts, eloquently highlighted the specific interest and originality of her work both as a poet and as a playwright, and all four performers went a long way to showcase the Glaswegian poet and playwright’s sophisticated art and deep humanity.

The event was enriched by the lively participation of a well-informed audience. A number of spectators (including Alasdair Gray, one of several friends of Ure’s in attendance, and a keen supporter of her work) took part in the final debate. This was not simply to ask questions, but to share their personal memories of the writer, evoking her as soft-voiced, kind and mesmeric, and highlighting her commitment to her work, as well as her unique style and self-contained elegance. Such glimpses of the writer’s life and abruptly interrupted vision — born in 1918, Ure died aged 59 in 1978 — made for a precious and inspiring coda to the more formal part of the event. 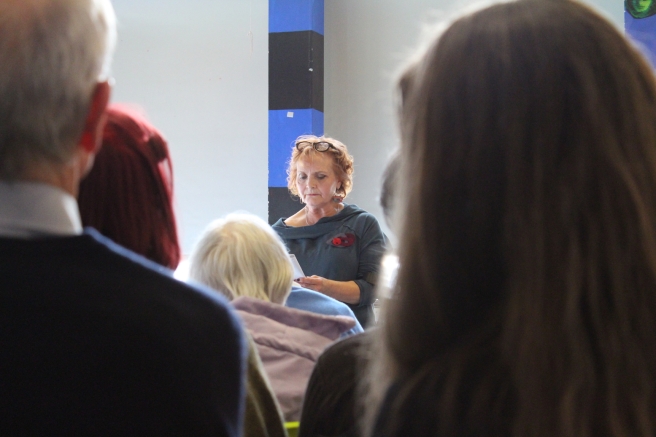 Alison Peebles reads from the poetry of Joan Ure.

The event also provided an opportunity to re-launch The Tiny Talent, a selection of poems by Ure, edited by Richie McCaffery and Alistair Peebles, with a foreword by Alasdair Gray, and published by Brae Editions on the author’s centenary. A most appropriate advertisement, as this slim volume is indeed a gem. As Riach pointed out in his article-review in The National (“Joan Ure: The Scots poet and playwright who set a precedent”, February 25, 2019), the elegance and sharpness of the poems anthologized there show that “a serious reassessment of the quality of her poetry is clearly required.” 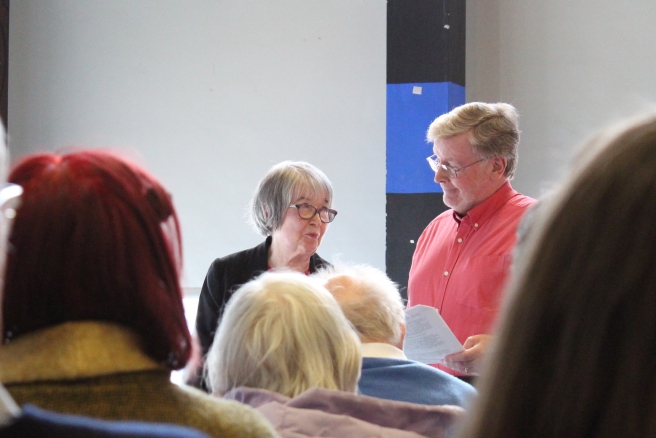 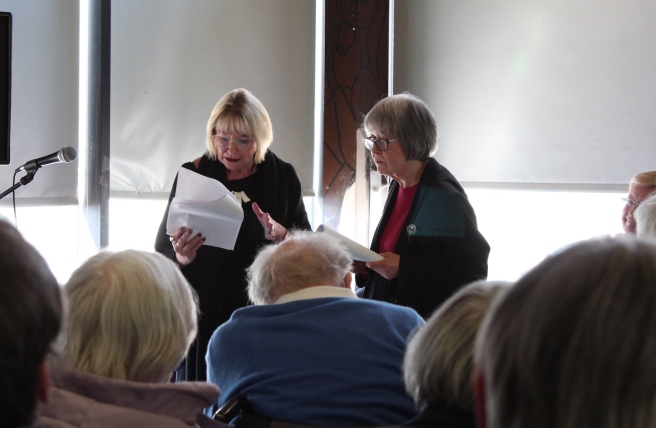 Above, Deirdre Murray (as Zeeri) and Alan Riach (Pollock), present an excerpt from Joan Ure’s unpublished play I see myself as this young girl. Below, Barbara Rafferty (Jessie) and Deirdre Murray (Susan) in an excerpt from The Lecturer and the Lady, also unpublished. (Scripts courtesy of Scottish Theatre Archive, by arrangement with the estate of Joan Ure/ Elizabeth Clark.)

Ure has been remembered by historians and critics of Scottish drama — she features, for example, in Douglas Gifford and Dorothy MacMillan’s edited volume,  A History of Scottish Women’s Writing (1997), in Ian Brown’s edited volume The Edinburgh  Companion to Scottish Drama (2011) and in his Scottish Theatre: Diversity, Language, Continuity (2013). But her poetic talent is indeed largely a 21st-century rediscovery.

Writers, women writers in particular, may be sidelined or forgotten for a number of reasons — very often because their vision or style are in conflict with contemporary dominant ideologies or literary conventions. But this does not mean that the work of a writer who has been classified as “minor” is indeed minor, and this review provides me with the opportunity to join the organisers and speakers of the GoMA event, in calling for a revaluation of Ure’s work, and indeed of her context in the Glasgow literary and theatrical scene of the 1950s-70s, a topic raised during the conclusion of the “Nudge”.

The recent “canonisation” of Scottish writer Nan Shepherd and in particular of her masterpiece, The Living Mountain, provides an example of a trajectory from a relatively dark corner of the Scottish literary canon to the spotlight of reprinted books and media attention. Ure would certainly deserve the same consideration. It is only through the reassessment of outstanding and yet marginalised figures like her that our understanding of Scottish literature can take on new, more nuanced and contemporary forms. Indeed, as Joy Hendry thoughtfully observes in a response she made to the recent volume, “tiny talents (or not so tiny) [are] buried everywhere in so many different ways”.

Carla Sassi’s publications include Why Scottish Literature Matters (2005); as co-author, Caribbean-Scottish Relations (2007) and Within and without Empire: Scotland across the (Post)colonial Borderline (2013); as editor, The International Companion to Scottish Poetry (2016).

Quotations from Ian Brown and Joy Hendry are taken from posts found elsewhere on this website.

The organisers wish to record their gratitude to the Estate of Elizabeth Clark/ Joan Ure, and to the Scottish Theatre Archive at Glasgow University Library for their assistance in sourcing material used in this production. And to thank the following Orkney companies for their generous support of the event: Andrew Appleby (Fursbreck Pottery); Ola Gorie, the Scottish jeweller; Hilary Grant , knitwear and textiles – and prints; and Highland Park distillery.

For details of how to obtain copies of The Tiny Talent: Selected Poems by Joan Ure, ed. Richie McCaffery and Alistair Peebles, with a foreword by Alasdair Gray, and published by Brae Editions @ £7.99, please contact the distributors, Stromness Books and Prints (grahamplace1@hotmail.com | 01856 850565), or write to brae.editions@pm.me. Publication of the poems was supported by a grant from Creative Scotland.