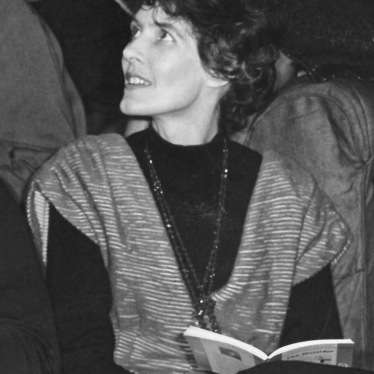 This pamphlet of 22 poems by the playwright and poet Joan Ure, pen name of Elizabeth Clark (1918-78), was published on November 5th of her centenary year. It represents the first occasion on which her poetry has appeared within its own covers. The selection was edited by Richie McCaffery and Alistair Peebles, the present writer, and it carries a foreword by Alasdair Gray.

Among others who have helped, we have to thank Christopher Small, Ure’s literary executor, for permission to reproduce her work. Publication was supported by a grant from Creative Scotland.

As an example, here is the first section of the title poem:

from The Tiny Talent

There was this woman and she had this tiny talent.
I call it talent for things must have a name.
She had this talent that it happened to be death
to hide. She knew this empirically because, having,
the first time, tried to hide it, she
broke out in a rash.
But she was Scots and difficult to convince.
No worse for that perhaps but we shall see.
The rash, unfortunately, cleared up quite soon.
‘It was no proof that I am hiding a talent’,
she said, ‘or I would have proof positive now and not
simply overnight’. She said ‘I’ll go and
hide my talent in another place.’ She did good
works and other useful things. This time she
fell down in a faint! She could not blame good
works, so on she went being ‘useful’ everywhere
she could. Next time, she wakened in a sweat.
‘The Devil’, she said, ‘The Great Deluder uses
ways like these and every one of them is to lead
a poor woman far astray.’ And it happened that
this argument made it easier to live with her family
who had always been suspicious of what she, now
and then, saw as her talent, for doing something else!

The poem appeared in issue 27/28 of Chapman magazine, entitled Woven by Women, published 1980. Alasdair Gray, a friend of the poet’s, has written several times about her work, as he does in that issue:

By [the outbreak of the War] she must have appeared as she did in the last twenty years of her life when I knew her: small, slender, fair-haired, with beautifully clear-cut features and always very young-looking, though sometimes too boney, because her guilt-feeling about being supported by someone else, implanted in childhood, lasted through marriage and led her to eat too little. She made her own clothes and dressed very well. She was eye-catching in a way that was too individual to be merely fashionable, too smart to be eccentric.

Her childhood, as Gray describes it, was filled with difficulty, repression of self being its chief focus.

When Betty was twelve, her mother entered hospital with tuberculosis, and Betty became her father’s housewife and working mother to her brother and sister. Mrs Carswell came home after two years and thereafter managed the house from her bedroom. It was important for Betty to keep looking happy. Depression was thought ungrateful to the mother who bore her, the father who nourished. How did she avoid becoming a neurotic drudge or empty-headed puppet? By imagination, by developing an inner world where, for a change, she had authority.

Someone else who has written about her work is the new pamphlet’s co-editor, most recently in the magazine Dark Horse. McCaffery’s survey is entitled ‘Mither Tongue: Scottish Women Poets of the 20th Century’. His article concludes with a discussion of Ure, which he begins with the following comment, stating unequivocally:

Glaswegian poet and playwright Joan Ure … was the most outstanding voice of her time, still at risk of near-total neglect.

(It’s worth pointing out that his article was written, though not published, well before there was ever any idea of embarking on this selection of her work. An account of this process will follow in a later post.)

It might now be hoped that Ure’s voice now stands a much better chance of being heard. As Olive M Ritch noted, in her review of the launch in Stromness:

With the publication of The Tiny Talent, Ure will no longer be overlooked and, more importantly, her work will now reach a new readership.

3 thoughts on “The Tiny Talent: Selected Poems by Joan Ure”